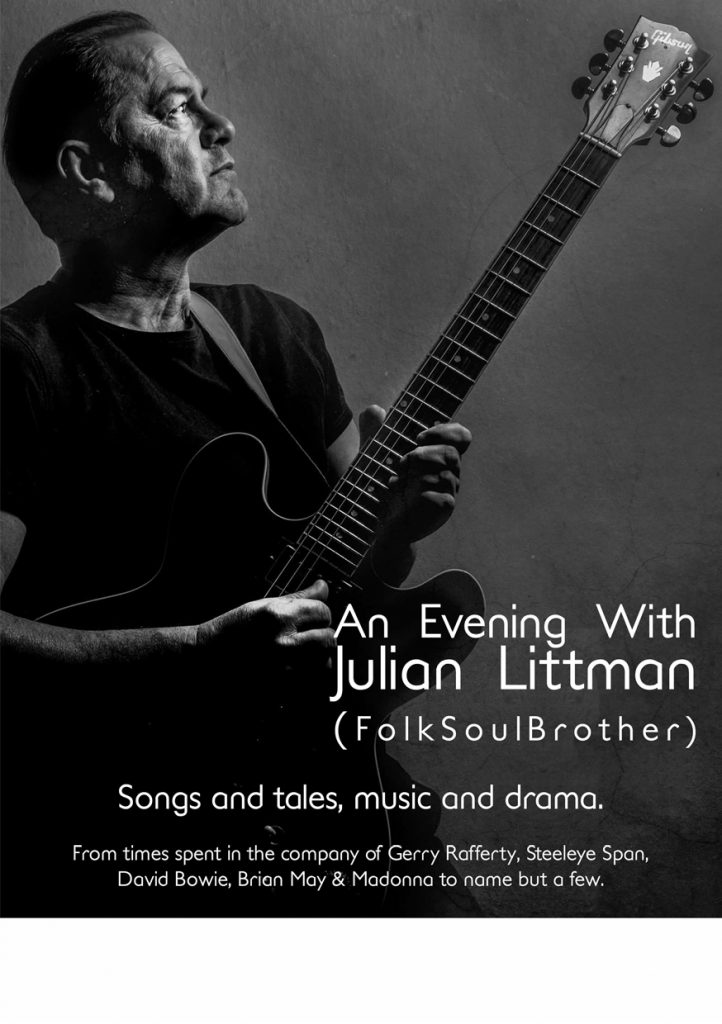 Originally trained as an actor from the age of 16, music was never far from his heart, indeed many is the time he’s called upon to play sing or compose within a dramatic context. In the early days he was part of the trio of musicians (Along with long time friend and partner in crime, Charlie Dore.) on the kids show “Rainbow.”
After two years they hung up their dungarees and went their own ways. Julian acting on TV on such shows as “The Sweeney.” “The Bill.” “Holby City.” “Hammer House of Horror,” and many plays and West End Musicals. Later on Julian hooked up with Charlie again, this time with a serious goal of making music and were sent off to Nashville by Island Records to record at J. J. Cale’s studio with Cale’s producer Audie Ashworth.. At the same time Gerry Rafferty was riding high with “Baker Street.” and invited Julian to tour and record with him. Thus ensued Julian’s brief encounter with the full Rock ’n Roll excess all areas lifestyle, Concorde, Limos and, well…you can imagine the rest!
He started playing on numerous recording sessions and his dulcet tones can be heard on many an advertising jingle.
1980 saw him in the enviable position of working with David Bowie on the BBC production of Bertolt Brecht’s Baal.
After that a big slice of his life was in music. Singing on “Sunnyvista” with Richard and Linda Thompson, more albums and touring with Gerry, Charlie, Cockney Rebel, Pete Townshend and playing mandolin on the Dexy’s Midnight Runners album, “Don’t Stand Me Down.” He appeared many times on the West End stage notably in “Pump Boys and Dinettes.” with Kiki Dee, Carlene Carter, Paul Jones, Brian Protheroe and the late Gary Holton. He also wrote songs for the likes of Sheena Easton, Philip Bailey ( Earth, Wind and Fire.) and Sister Sledge.
The nineties saw him again in the West End in the hit show, “Return To The Forbidden Planet.” which played in Osaka, Japan for a month.
After Musically directing a revival of “Hair” at the old Vic London, he toured extensively as a member of Barbara Dickson’s Band.
In 1996 he landed the role of Juan Duarte, the brother of Eva Peron (Played by Madonna) and directed by Alan Parker in the movie version of the Rice/Webber musical “Evita” shooting in Argentina, Hungary and London.
Still with music being a mainstay of his career (Constantly working with Charlie Dore.) he appeared in many more movies such as “The Life And Death of Peter Sellers” with Geoffrey Rush, “Al’s Lads” (playing Al Capone) “Running Scared” with Paul Walker and many more. He also renewed his friendship with Gerry Rafferty and wrote and recorded with him in his latter years.
He appeared yet again in the West End in the Queen musical “We Will Rock You.” having been a longtime friend of Brian May and his wife Anita Dobson.
Currently he is a member of Steeleye Span as instrumentalist, singer and composer and now is breaking out with his solo show “ FolkSoulBrother.”
He’s made two solo albums, “Life’s Rich Bloody Tapestry.” and the soon to be released “ Trueville.”